The first ever #SaltwaterSelfie Challenge happened at Mayfair Clubs Lakeshore on Tuesday the 18th of July, in tandem with the official 2017 Search for Miss World Canada, Fitness Day event. KPDI was there too, with a submersible camera to document all pageanteers bold enough to participate in the concept. Fitness Day is a nice way to say ‘mandatory fitness testing’ which may seen like a throw-back to a more martial age, and, well it is. The World organization’s pageant rules are over seventy years old, and haven’t changed much since the nineteen sixties. The whole regime is set out by this UK based licensor. Each ‘World’ licensed pageant in every country (which feeds into the annual Miss World pageant) must adopt standardized health and fitness testing. The result is that one delegate will always be selected as ‘the fittest’, and she will be celebrated regardless of her standing in the Finals, as the Fitness Category winner.

Behind the Scenes at #SaltwaterSelfie Challenge

While all that was happening in the main gymnasium area of the Lakeshore Blvd health club, our gang from KPDI, armed with our laptops and a HERO5 go-pro cameras and a box of Snappy Towels, used signage to solicit young women to swim in front of submerged lenses and they came willingly, in truth. 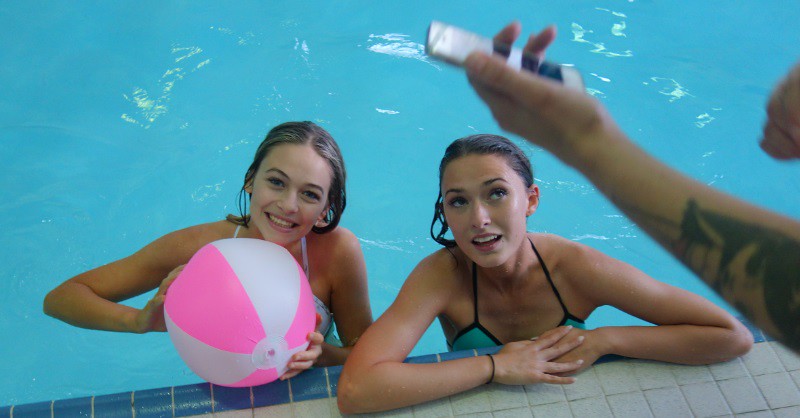 Small groups from each province came and shared the pool, and media spotlight. One by one the delegates appeared, were registered and recorded swimming beneath the waves.

Before installing the camera at the back of the pool area at Mayfair Clubs on Tuesday 18 July, we knew exactly what the mounting arm could do, and the exact size video frame we’d get.

We knew this because we’d been there ten days earlier with David Suddaby, a camera tech who rented us the HERO5 underwater camera system. We tested everything including the mounts, exposure and WIFI possibilities. There were no WIFI possibilities underwater, but that came as no surprise to us – we’d learned that ten days ago. In short, we knew we’d be getting great video because we’d tested that, but what we didn’t know was how many delegates would deign to participate. 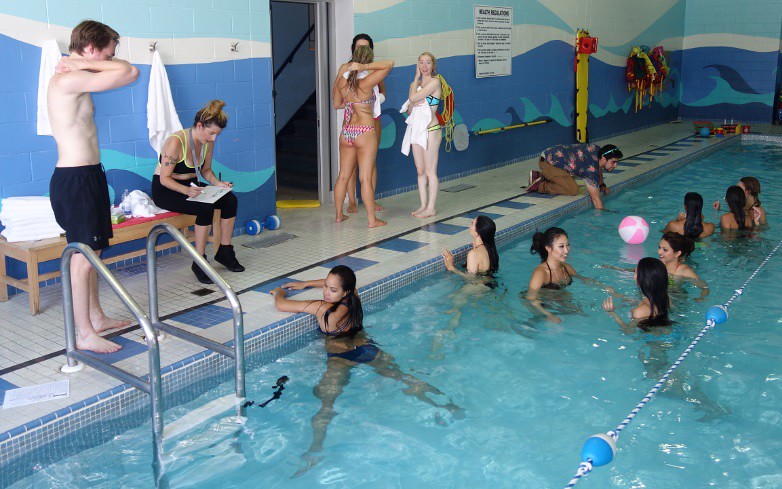 The #SaltwaterSelfie Challenge is essentially a two-fold assignment; first the subjects are invited to pose underwater, and then publish the piece with proper hashtags on their own profiles. That’s a tall order. If we opened this attraction up to the public, with the same microfiber towel prizes, I predict we’d have a less than five percent participation rate on the first task in the pool, and once presented with the video product, less than a quarter of those participants would actually publish it with proper hashtags… So how did we do?

Of the fifty-seven delegates in the 2017 Search for Miss World Canada, forty two participated in the #SaltwaterSelfie and after these forty two short video clips were sent to all participants (in under three hours after the event took place, nice work Alec Glover – we could see on Facebook they had all been viewed at least once), fourteen delegates published and promoted their #SaltwaterSelfie videos on Instagram, six on Facebook and two on Twitter. All of this media was further promoted, liked shared and retweeted by both Mayfair Clubs and KPDI.

Did the #SaltwaterSelfie Challenge make Sense?

Absolutely. For a relatively low cost investment, the business made over 100,000 impressions on Instagram / Facebook alone, and fourteen thousand more on Twitter, as per #SaltwaterSelfie Tweetreach stats collected Thursday July 20th. Moreover, the fitness gym gained new friends and followers on all three platforms. And in full disclosure, that wasn’t the reason behind this initiative.

The #SaltwaterSelfie is the sugar that makes the medicine go down. We used the whole shebang as an SEO link-building exercise to ‘give them something to talk about’, just like we did here. The results for that will be shared as part of research we are doing at KPDI to streamline our SEO service. This is one of several new event-based or experiential marketing programs we’re trying as part of something new called Authentic SEO. Stay tuned. Subscribe to this blog feed. Follow us on Twitter, Facebook, Instagram.